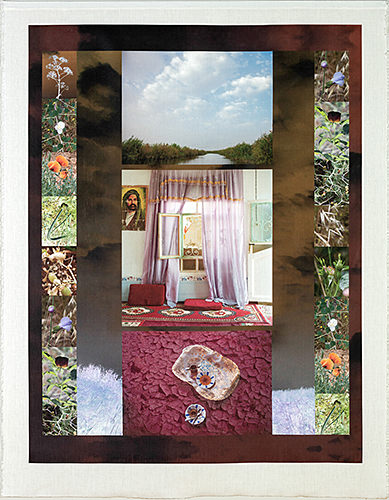 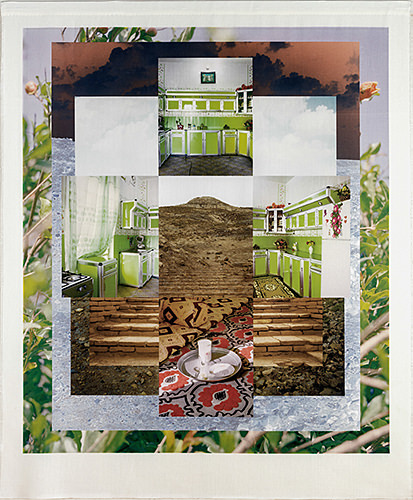 Green Kitchen (with unexcavated Temple of Inanna at Uruk and steps of Ziggurat at Ur), Southern Iraq Marshes, 2011–16; 69×58 inches 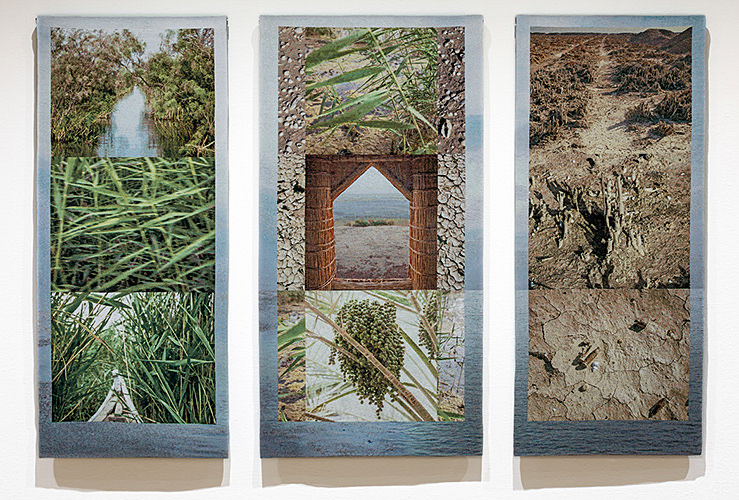 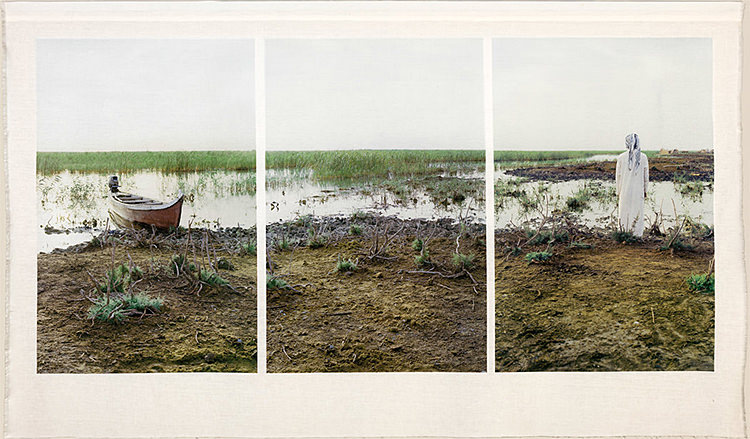 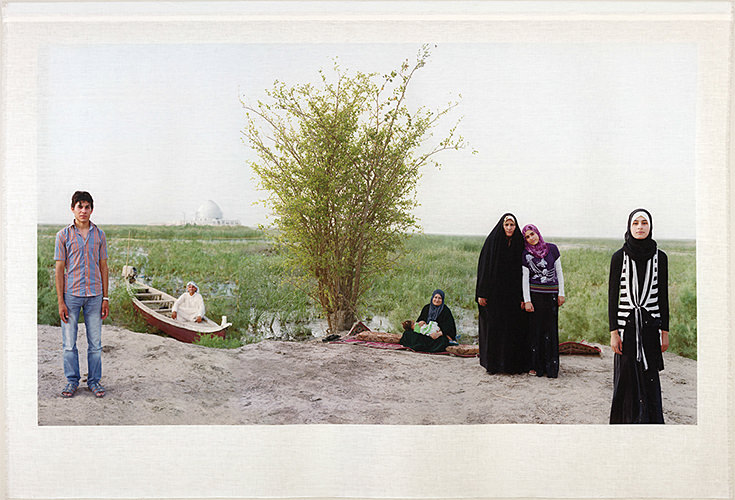 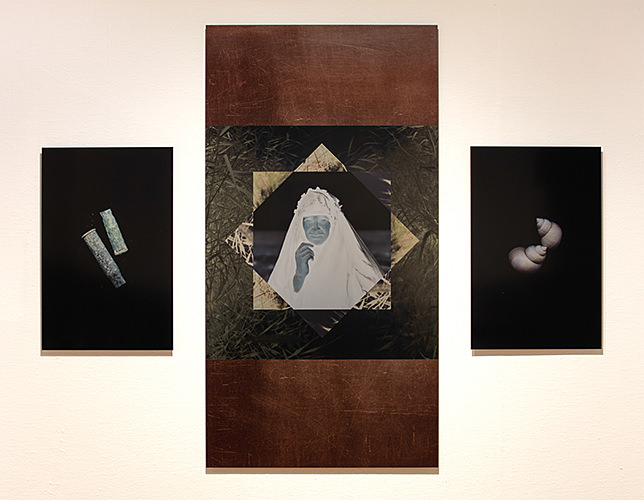 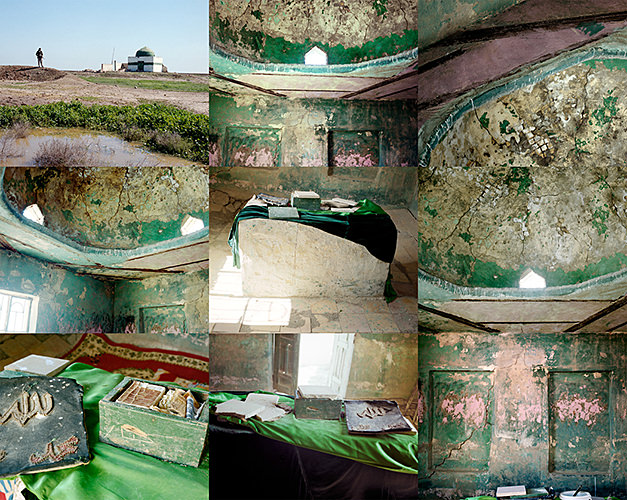 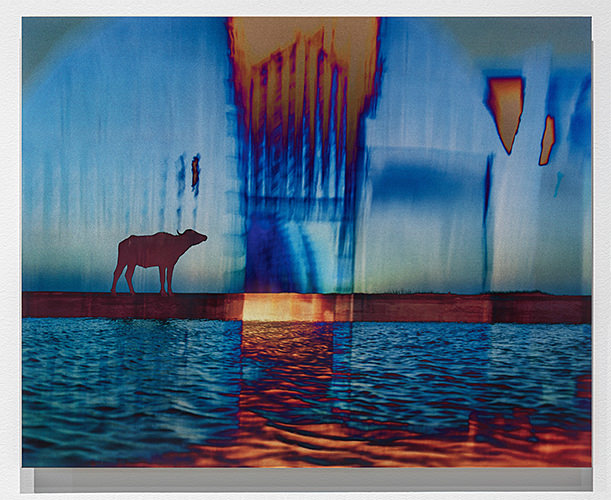 Brian Gross Fine Art is pleased to announce a solo exhibition of new work by Santa Fe artist Meridel Rubenstein, opening Saturday, February 23, 2019, with a reception from 4-6pm, and an artist’s talk and book signing at 4:30pm. On view will be eight new photoworks from Eden In Iraq, the final part in Rubenstein’s three part series, Eden Turned on its Side. In Eden In Iraq, Rubenstein explores themes of destruction and renewal through the social, political, and environmental history of Southern Iraq, the area believed to be the location of the Biblical Eden on Earth. The exhibition will be on view through April 6, 2019.

Rubenstein’s series Eden Turned on its Side investigates ecological processes across time that either reinforce or destroy the notion of Eden. These photoworks focus on the poetic intersection of nature and culture in relation to ecological and social imbalance. Rubenstein’s previous exhibitions at the gallery focused on Photosynthesis and The Volcano Cycle, the first two parts of the cycle. In the final segment, Eden In Iraq, she has documented the land, culture, and people of war torn Southern Iraq, and co-designed a wastewater garden/memorial that aims to transform relics of war into art.

In Eden In Iraq, Meridel Rubenstein explores environmental devastation and renewal in the marshes of Southern Iraq, the area believed to be the site of Biblical Eden on Earth. Rubenstein captures the cycle of environmental, military, and cultural devastation through compositions of layered imagery, including ancient Sumerian ziggurats, marshland plants and animals, contemporary Iraqi domestic interiors, destroyed Islamic shrines, the marshland peoples, and an icon of the Sumerian goddess Inanna. Realized through dye sublimation images on aluminum, works printed on linen, and woven jacquard tapestries, the photoworks in the exhibition reveal the complex interconnections between the cultural histories, political forces, and their impact on this area of the world.

Meridel Rubenstein was born in Detroit, MI and received an MA (1974) and MFA (1977) from the University of New Mexico, Albuquerque. From 2006–2018, she was a Visiting Associate Professor at the School of Art, Design, and Media at Nanyang Technological University in Singapore and is currently an Adjunct Professor at Arizona State University’s School of Sustainability. From 2000–2005, she taught at Smith College, Northampton, MA, and from 1985–90 she headed the photography program at San Francisco State University. Rubenstein has received fellowships from the Guggenheim Foundation, Rockefeller Foundation, and Bunting Institute at Harvard University. She has received grants from the National Endowment for the Arts and twice received the Pollock-Krasner Foundation grant.

Rubenstein’s work has been the focus of numerous museum exhibitions throughout the US and Europe. She was one of only two New Mexico artists included in the inaugural Site Santa Fe in 1995. In 2018 Rubenstein was the subject of a one-person exhibition, Eden Turned on its Side, at the University of New Mexico Art Museum, Albuquerque, for which a monograph was published. Her monumental installations Oppenheimer’s Chair (1995) and The Meeting (1993) are currently featured in the exhibition Atomic Histories at the New Mexico History Museum, Santa Fe, through May 31, 2019. Rubenstein’s work has been exhibited at the Louvre; International Center for Photography, NY; Museum of Contemporary Photography, Chicago; Irish Museum of Modern Art, Dublin; Smith College Museum of Art; and the New Mexico Museum of Art, Santa Fe.