Guardians of the Secret II 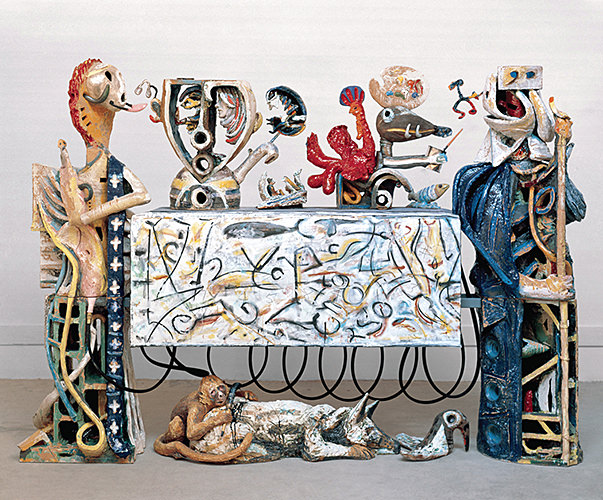 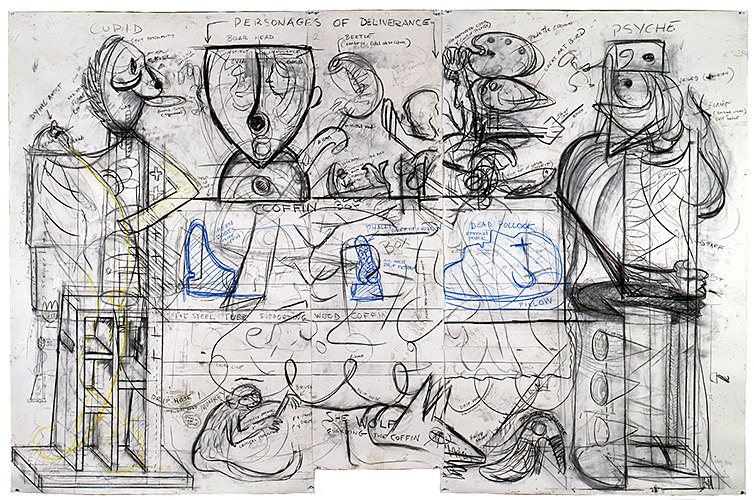 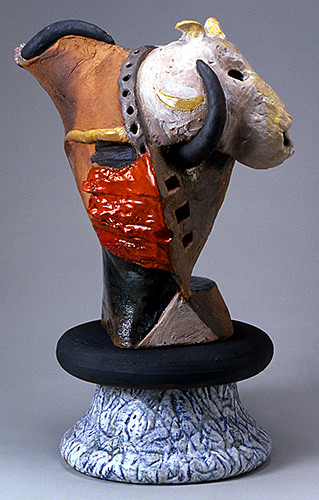 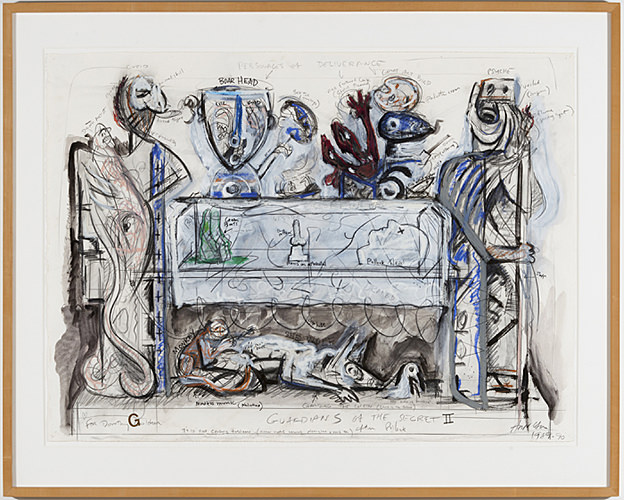 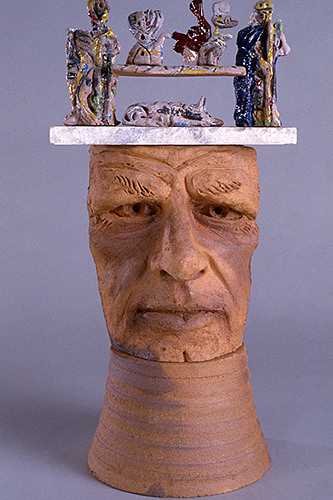 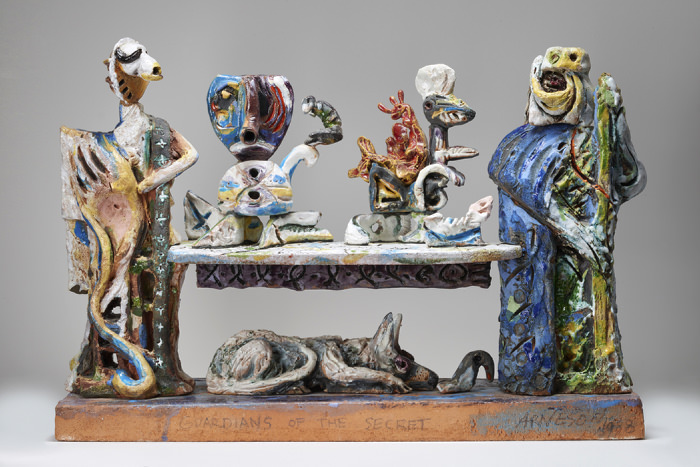 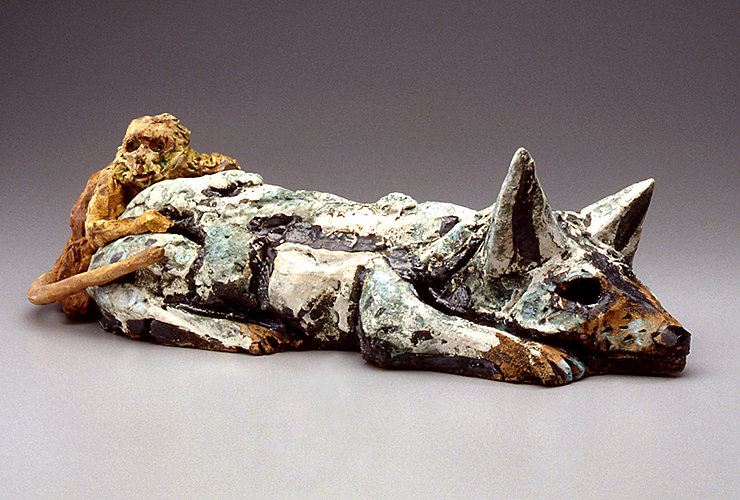 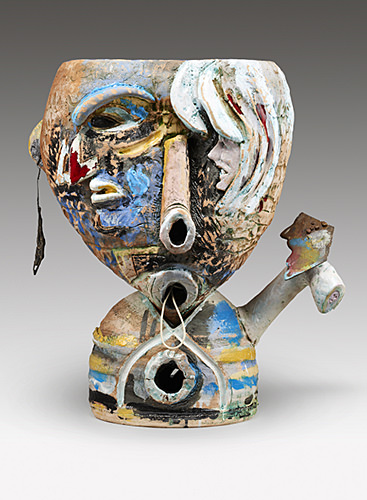 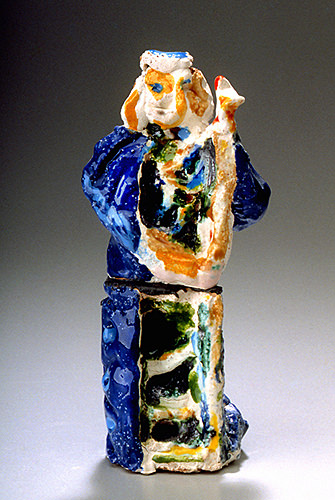 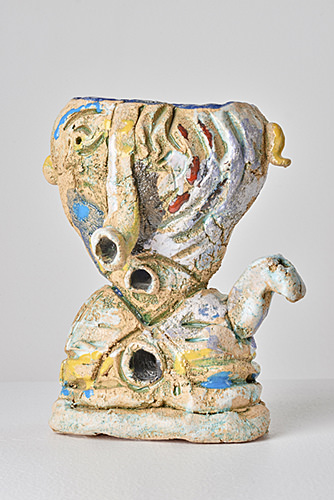 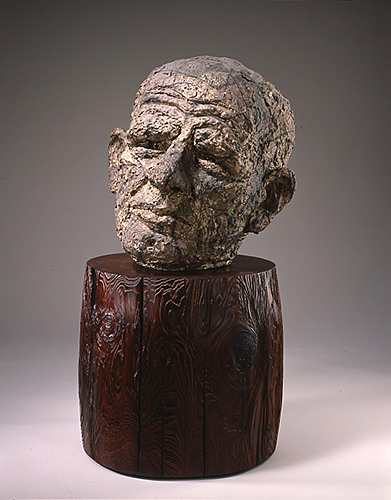 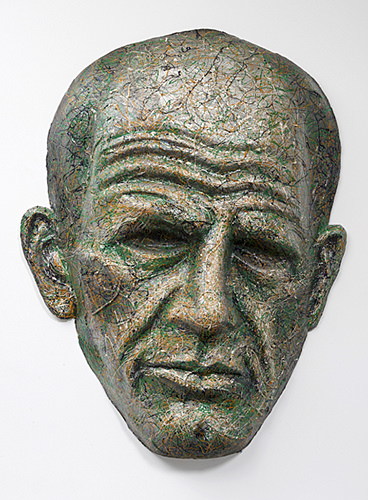 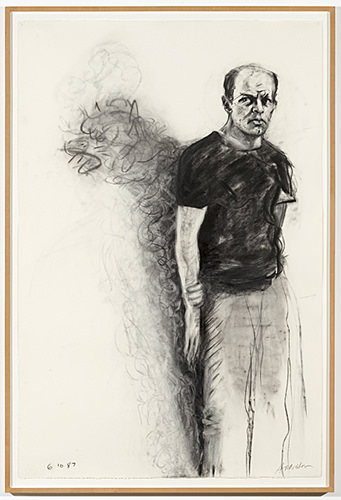 Guardians of the Secret II is the culmination of nearly a decade of Arneson’s exploration of both Jackson Pollock the man and his art. Beginning in 1980, Arneson started to look for other artists to use as replacements for himself as both model and muse. Of the different artists he chose, he found Pollock to be the most compelling surrogate, completing 97 works with Pollock motifs between 1982 -1990. Arneson picked Pollock’s Guardians of the Secret, 1943, for his homage to the artist’s work because it was the only major Pollock on view in the Bay Area, found in the permanent collection of SFMOMA.

Built life-size from glazed stoneware, steel, wood, canvas, epoxy, and mixed media, Arneson’s Guardians of the Secret II succeeds in translating Pollock’s semi-abstract painting into concrete, literalized forms, solidifying ambiguities and imaginatively creating a backside to the original work. In interpreting the painting, Arneson turned the sculpture into Pollock’s cenotaph, entombing in the central coffin form symbolic reliquaries. Over the coffin is draped a painted canvas cover that reproduces the central area of the original painting. Resting atop this are various symbolic figures, while supporting all of this is a steel tube stretched between the two life-size guardian figures made out of clay. Under the coffin lies the “she-wolf” who is being mounted by a brush-wielding monkey.

During the three years it took to create Guardians, Arneson made multiple study pieces and models of the entire composition, as well as individual elements. Included in the exhibition will be nine key study works, including the larger than life size working drawing from which the final piece was rendered. Additionally, on view will be three works from the larger “Jackson Pollock Series”, including the haunting drawing J.P.’s Shadow (1987), Stringhalt J (1987), a cast paper wall relief portrait of Pollock covered in paint splatters, and a large scale ceramic head of Pollock resting on a redwood trunk entitled Golden Stone (1986).

A brochure about Guardians of the Secret II with an essay by Bill Berkson will be available in the gallery during the exhibition.

Robert Arneson was born in Benicia, California in 1930. In 1958, he received an MFA from Mills College in Oakland. Arneson taught at the University of California at Davis for 29 years, retiring in 1991. He died in 1992.